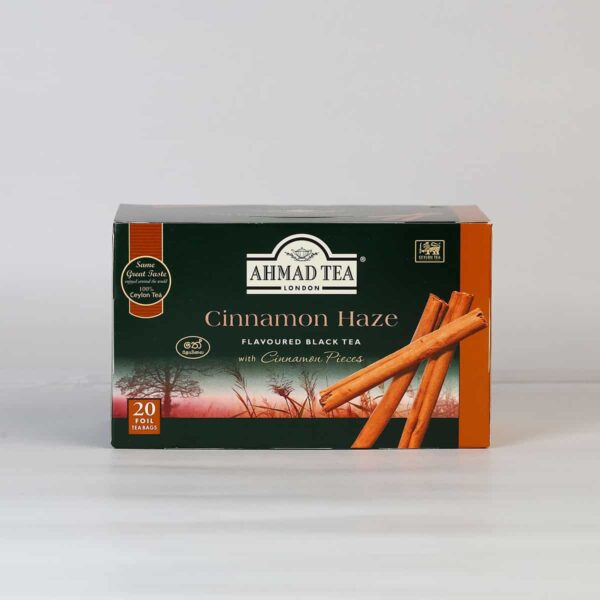 Ahmad Cinnamon Haze is the majestic flavour concoction of Ceylon black tea spiced with fresh and authentic cinnamon from Sri Lanka. Undoubtedly the best cinnamon tea in Sri Lanka, this masterpiece of a blend cleanses your palate and refreshes your body and mind.
The cinnamon incorporates a spicy kick to the flavour, which is balanced out by the freshness of Ceylon black tea. This blend is perfect for a rainy evening when all you want to do is cosy up with a good book.

Cinnamon Haze 20 Foil TB carton consists of 20 foil-wrapped tea bags filled with the divine flavours of the Ahmad Cinnamon tea. This packet is perfect for those who are always on the go. It is also the best choice for those who want to experience the taste of this particular blend first.

Brewed by itself, Ahmad Cinnamon tea is rich and sweet in flavour and has a fragrant aroma that relaxes the mind. A drizzle of honey or a squeeze of a fresh lemon can enhance the flavour of Ahmad Cinnamon tea. The zesty flavour of the lemon wedge can balance out the strong flavour of Ceylon tea and the sweet and spicy flavours of cinnamon.

Cinnamon has quite an intriguing history. Many decades ago, the spice was known to be of premium value and considered a luxury among the westerners. This was mainly because the origin of cinnamon was kept a secret by the merchants to preserve its rarity. However, the English defeated the Dutch and expanded the cinnamon export in Sri Lanka. This action inspired the use of cinnamon in various avenues. Today, most nations know of Sri Lanka as the birthplace of cinnamon.

Enjoy a warm cup of Ahmad tea Cinnamon Haze, and experience the taste of cinnamon, a spice with historical value to Sri Lanka, combined with the best quality Ceylon black tea, another export that put Sri Lanka on the map.